I have 2 small dogs (Floyd & Preston) that are my entire life, yet I sometimes need to go places! I don’t have a car, so they can’t come with me anywhere I go.
Preston isn’t a fan of cats or dogs (that aren’t Floyd) but he does warm up to new humans eventually.
I only ever see ads for dog sitters that want them in their own home with cats/dogs - this doesn’t work for us unfortunately.
They are pee pad trained so no walks needed. They are also in poor shape due to their age and physical conditions.
The surgeon was adamant that Preston isn’t allowed to climb stairs, no jumping, no running, no tug-o-war. Any of these could actually kill him - as he has herniated disks in his spine that can burst at any moment. We know this because he burst 2 herniated disks last year, temporarily paralyzing him and nearly ending his life, had it not been for a 10K surgery and 5 days in intensive care.
So I need a caring, loving, responsible person who will treat them with the utmost care their lives depend on.
If this sounds like a gig you feel confident in doing, I would love to hear from you! 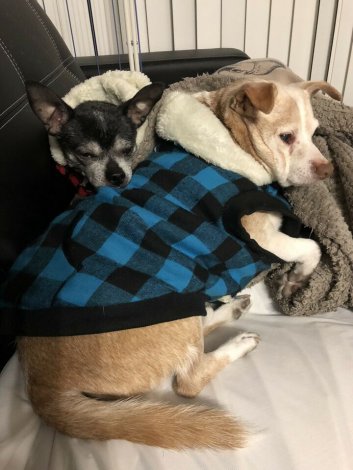